What is a CAT tool? 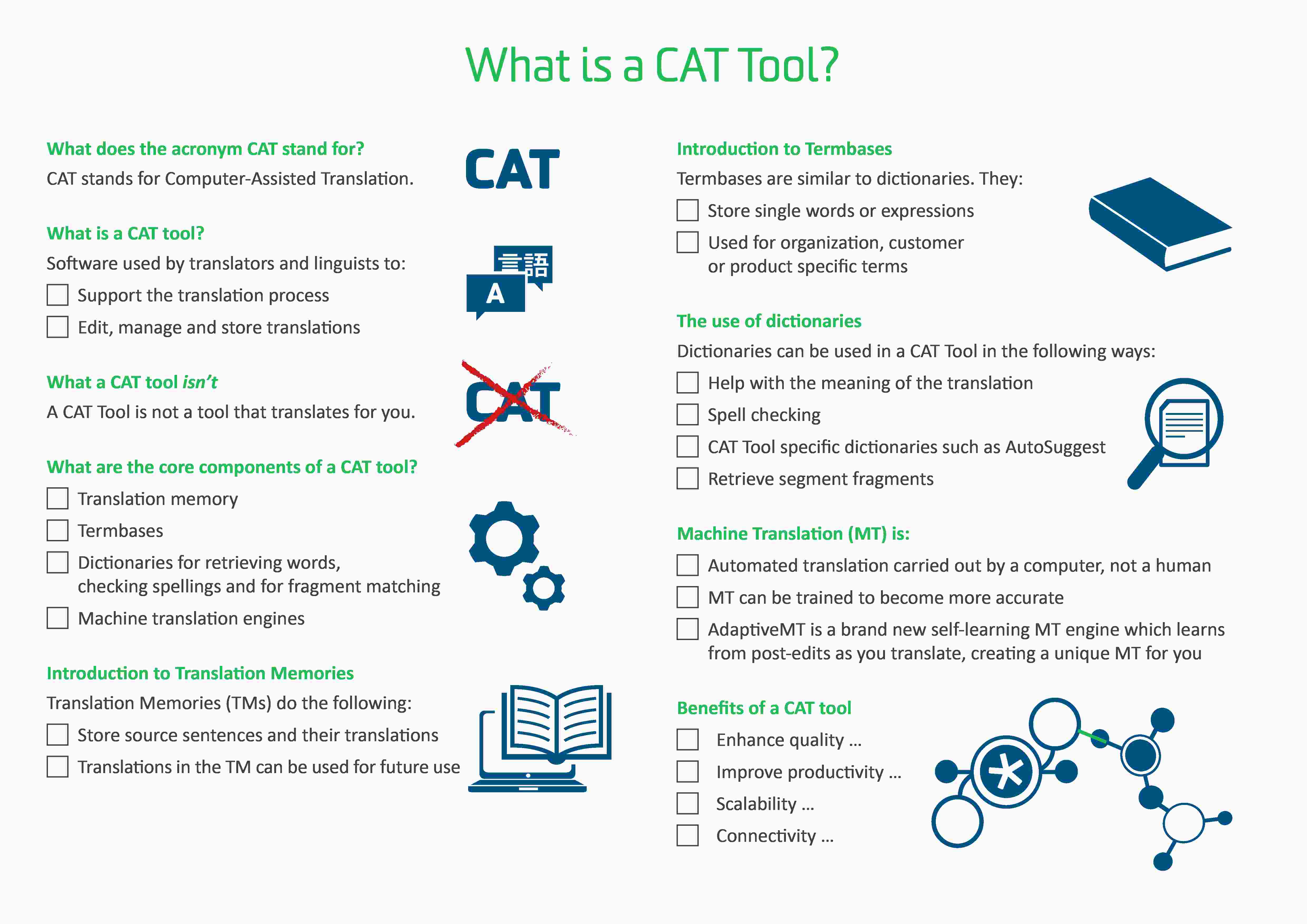 What does the acronym CAT stand for?

CAT stands for computer assisted translation and there's actually different explanation for what it actually means. Some people say computer aided translation but I think if you check out on Wikipedia that's what you'll find.

Let's carry on. What is a CAT tool?

So, it's a software used by translators and linguists. It does, different things so first of all it's there to support the translation process. And actually it allows you to edit, create, and store, manage a translation so it does actually quite a lot of different things and today we're going to look a bit more at all the things that a CAT tool does. So, I’m going to tick this box here ...

People do ask us, and I think one of the key things to bear in mind. A CAT tool is not something that can translate for you. It's not a machine translation, so you still have to do your own translation I'm afraid. It will help you, but it doesn't do all the work which is great because we continue to need lots and lots of translation to deal with the huge amount of content.

So, let's continue on what are the core components of a CAT tool?

What's inside a CAT tool? Lots of different things. So, translation memory. This is one of the key essential components of, of a CAT tool and actually the technology that has been around for over 30 years. Again if you want to find out more there's lots of information that you can find online. But it's actually really all technology that has evolved over quite a long time and that's kind of at the heart of a CAT tool.

The second piece is a term base and we're actually going to dedicate a video specifically on terminology and what a termbase is. You know at - at first a high level it's a place, a database, where you're storing terms and we're going to have to look at what's the difference between a term and a translation memory and we'll spend a bit more time on that. There's also lots of added dictionaries that can help you retrieve words, check what you've done before so there's a lot of other help that you get apart from the translation memory and the termbase and there is actually machine translation as part of a CAT tool, typically. So, with not only your translation but with the help of machine translation if you want to you can translate in a different way.

There's one more thing that I haven't put here on the board, which I think it's important. I'm going to kind of, add a little box which is sort of, I'm going to call it DTP. My writing there is not quite as neat and I've ruined the really nice whiteboard. A CAT tool also enables you to open a lot of different files. So, at the end, this is another acronym, desktop publishing DTP you don't have to do a lot of work around the file itself. So, you can take a PowerPoint, you can take a Word, you can take HTML and a CAT tool will open those files, extract the text so you can work on the translation which is kind of what a translator wants to do. You don't want to spend a lot of time adjusting texts, realigning it, you want to translate and spend as much of your time as possible on the core tasks which is translating and a CAT tool allows you to do that. It takes all texts out, you work on the texts and the beauty of it is that it will put all the text back into the original format.

Of course you're going to have to do some small adjustments because languages are tricky. Some languages are longer than other. From English to German you might actually have an extra 30% length and so you will have to fix it but you don't have to align and adjust an entire document. So lots of things and different components in a CAT tool.

Okay. So, let's introduce a translation memory and what it is.

That's the other component I mentioned earlier. So let's have a look at what's a term base. They're kind of similar to a dictionary but I think most terminology experts would not be happy if I used this definition of what's a term base and calling it a dictionary. I think we're going to have a video specifically on terminology so we can explain why it really isn't a dictionary. So but at the high level a termbase, first of all, is store single words or expressions. I think this is already one of the differences of the dictionary because if you think about it in a dictionary you tend to just store one word. Whereas here you can actually store an entire expression. And the second thing is that you can use it to dedicate words or expression for customers, organizations so that when you do need to translate something in a very spe-specific way or in fact if you don't need to translate something, and you need to for example, a, a brand that doesn't need translation you can continue using the source text. So a term base is something that can help you deliver a more accurate and high quality translation after all because it can remind you how some things are translating in a specific way.

There's lots of other help when you're working with a CAT tool and we talked about dictionaries.

I, I, I think it's a bigger sense than just a dictionary but just for simplistic we kind of call them dictionaries and it can in-incorporate lots of different things. So, there's various other ways that a CAT tool can use to help you translate and the idea is that you have as much time as possible to think about how you translate something and translating is really difficult. I'm Italian. I speak English as a second language and my native lan-language is Italian, and but I'm not a translator and it's so hard to take a phrase from English and turn it into a nice, authentic so-sounding sentence in my native language and so we want to make sure, and a CAT tool helps you, having as much time as possible on the thinking side of the translation piece. So, the most monotonous and repetitive tasks, we are helping you with.

So, for example, we are helping you with the meaning of some words. So a termbase for, for example can help where you can introduce your own specific words that you get reminders from. You have spell checking. Of course you know your native language that you're translating in but spell checking is always helpful and it's a sort of monotonous, tedious task that we want to minimize the time you spend on it. We have a concept of AutoSuggest so we can take lots of different resources and suggest them as you translate. Again, so often you might translate something and you think "I remember I translated this sentence before" or two or three words within a sentence. You have that feeling that you have translated something before and a CAT tool can help you here. It can suggest how you might have translated things before. You might take that suggestion, you might scrap it, but the CAT tool keeps on giving you prompts on how you've done your previous work.

And it an also retrieve segment fragments which is a little bit of what I was saying now. And I kind of introduced through concepts there. Wh-what is a segment? Um, and we also need to look at specifically what is a segment. But, it's like a - a phrase and a fragment is a piece of that phrase. So all these different ways a CAT tool has to help you is all about trying to reduce some of the more monotonous tasks but also is trying to suggest more and more of what you've done before.

So when you have done a great translation that you were really happy with you can reuse it and you don't have to take the same amount of time recreating exactly that same magical translation that perhaps you created a month before, six months before. So, that's one of the key tools that, key features that a CAT tool has.

So, let's finish off. What are the benefits of CAT tool?

There are various sides to it. The first one is quality and I think this is one of the key things. Often we talk and we think about software as something that makes you just quicker, but I think when it comes to a CAT tool we've seen all the help that comes into play can help with quality. When you have done a great translation that great translation can be reused. The fact that we can save a lot of time doing some of the more boring tasks, can actually leave you with more time to do the more creative side of the translation which is translating a complex sentence and marketing its slogan, or just the very difficult chemistry expression into, translate those. So that's one of the key things where, a CAT tool can help in terms of quality.

Of course it improves productivity. What is productivity? Basically it's translating faster. So, if you are using a CAT tool you can translate faster. Some of your translations are reused and you can work in a quicker way. In some cases this can be significant. Sometimes, for some type of content, you might have 70, 80% of content translated before. Maybe it's the manual for a piece of product, and there's a new version of that product which isn't that different than the previous one and you know if you've ever seen any of our other videos we've got the photo printer. Think about a photo printer manual between different models. There might not be that much of a difference and so a CAT tool can really speed up the process of translating these different variations.

There's, of course, the topic of scalability. The amount of content is created it's huge, and most people, companies, organizations, governments are struggling to translate all the content they created and in all the languages they want and I have to bring it home for me, being an Italian, if you look at our company content and the fact that we're not translating everything into Italian is just a sign of how hard and the difficulty of scaled amount of content translated and a CAT tool can make a significant difference in how much a company can translate.

And finally it's connectivity. A CAT tool, one of the benefits is that you are also have the ability to work by yourself on your computer but you can also connect with others and especially when there are large projects, you can actually share some of the assets. You can work with other people and make sure that your translation is used by other people, terminology shared across an entire team. So whether you are a translator where you're going to benefit specifically from the quality and the productivity enhancements and hopefully doing less of the boring tasks and more of the fun task of translation. So whether you are a company or a translation agency who are trying to translate more or stay on top of your content a CAT tool can really make a difference.