There is no content on local website I understand, close this message.
Welcome to the micro homepage!
The page is not available in your local language
Go back
Stay
Update October 9th 2019: This blog refers to adaptive/statistical machine translation, which has now been replaced by SDL’s powerful neural machine translation (NMT) solution. To learn more about NMT please click here.

There’s a lot to like in SDL Trados Studio 2017, so these are just a few of my favorite features, in no particular order.

In this simple example, by checking and unchecking “Treat special characters as inline placeholder tags" in the Word file type settings, I can see how the file would be affected by this.

Here, the non-breaking space, which is considered a special character, will be converted to an inline placeholder tag.

Here, the non-breaking space will not be an inline tag.

This example uses the Word file type, but the preview feature is available for other file types as well.

This isn’t a major Studio feature, but I find it very useful. It allows terms to be recognized even when they are part of longer terms. Before Studio 2017, this wasn’t possible, and the Term Recognition hitlist included only the longer terms found in a segment.

To illustrate this, have a look at the example below. With the default settings, only “average temperature" is listed in the Term Recognition window, even though the Termbase Viewer shows that the termbase also includes “average" and “temperature" as separate terms. 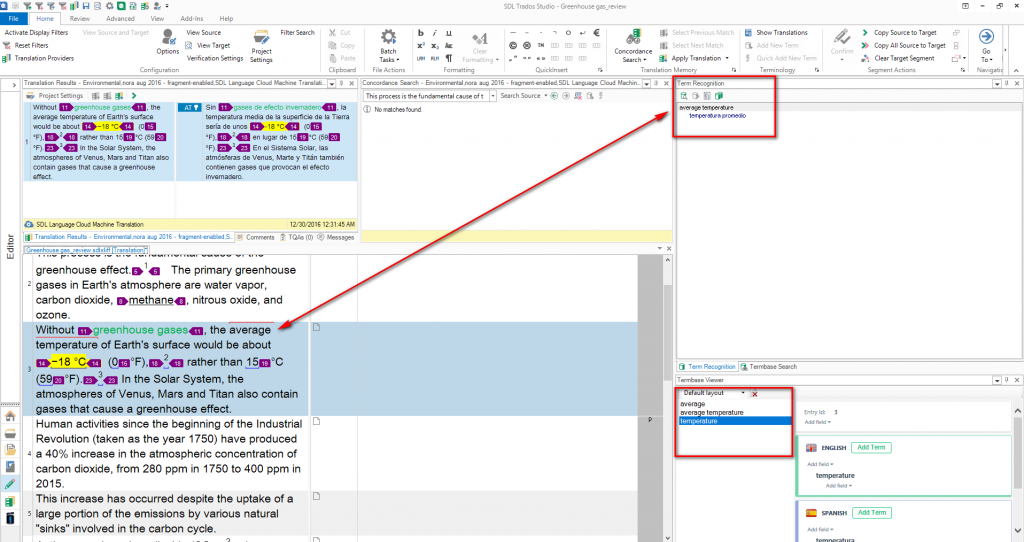 In Studio 2017, we can now go into the termbase search settings and check the “Allow overlapping terms" option. 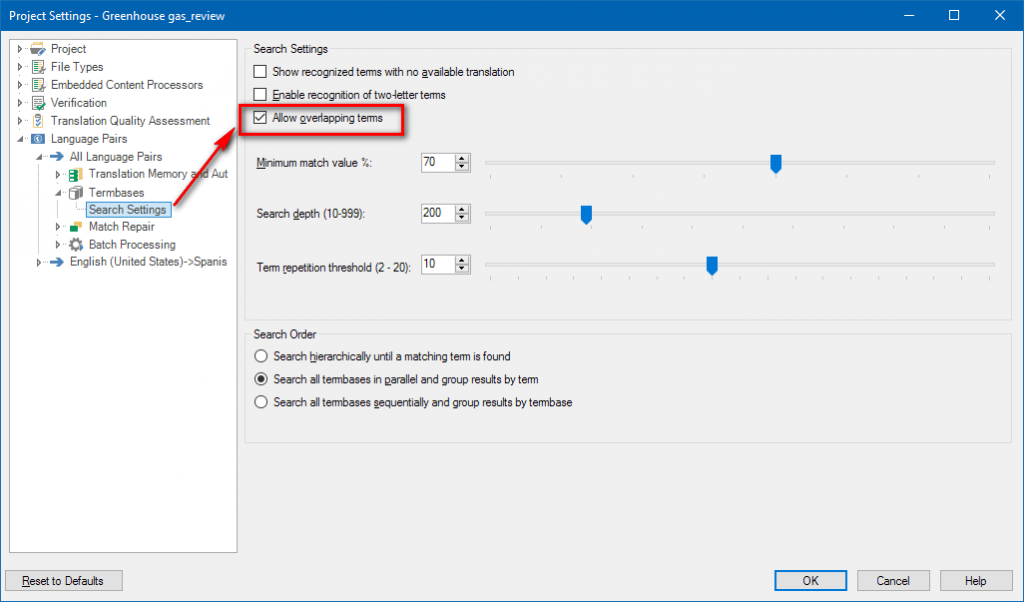 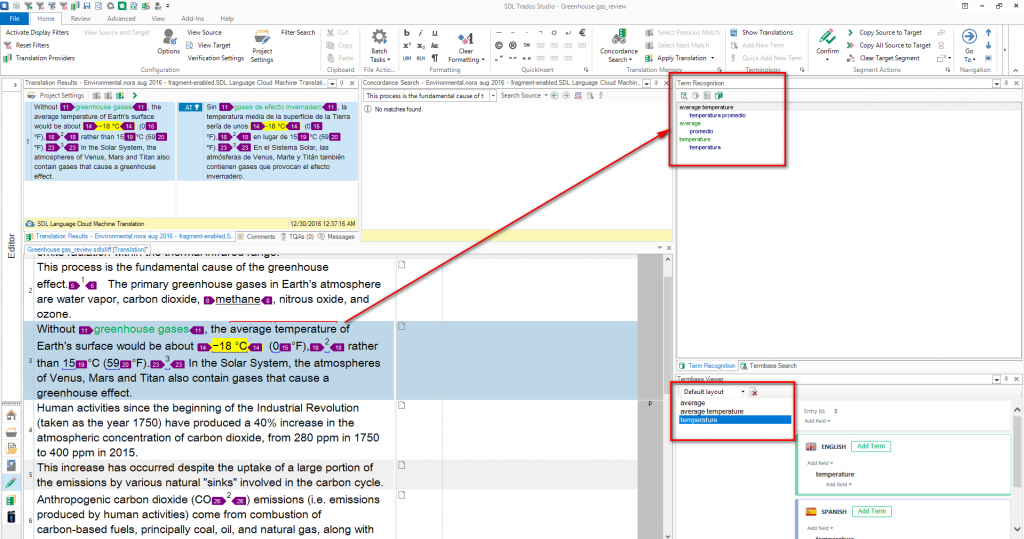 This gives the user more flexibility and enhanced control over terminology use.

3. The Default layout in the Termbase Viewer

This new feature exists not only in Studio 2017, but also in MultiTerm 2017. It creates a more user-friendly experience than the older layouts. In the past I always used the Flags layout, for no reason other than that was what was chosen by default in Studio, but I found that term editing wasn’t particularly intuitive. With the new Default layout, you just place the cursor where you want to make a change, start typing, hit Enter and you’re done. There are even buttons to help with common tasks such as adding or deleting terms. 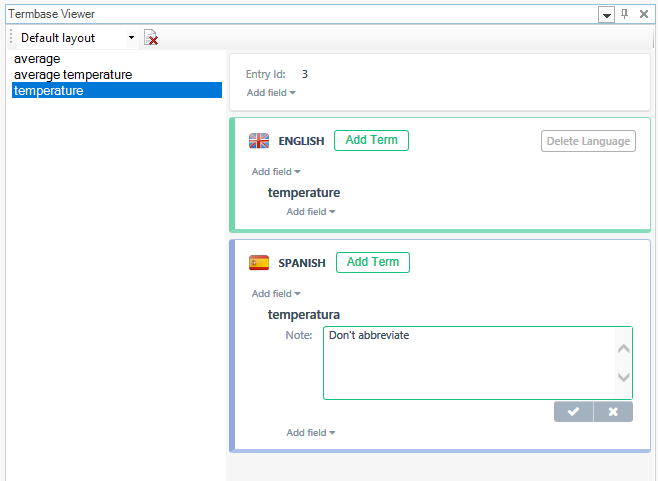 This had been on my wishlist for some time, and I’ve been using it extensively since it became available. While pre-2017 versions of Studio already had a basic display filter, it wasn’t possible to combine criteria, and sometimes you need to filter for segments that are, for example, unlocked translated repetitions that include word X in the source and word Y in the target, and have an error message. With the new advanced display filter, this is now easily achieved. 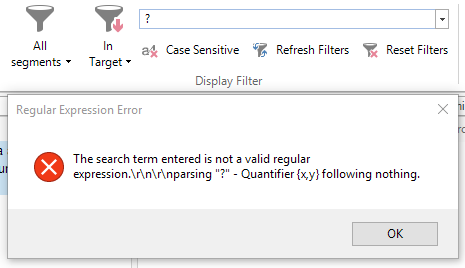 The advanced display filter allows the user to decide whether the character should be interpreted literally, which is the default, or as a regex metacharacter, which requires the user to check the Regular Expression box.

In this example, the advanced display filter shows the segment including question marks.

Here, with the Regular Expression box checked, no filter is applied and the user is shown an error message.

I’m sure we’ve all encountered frustrating segments that are a very high fuzzy match, where the only difference with the contents of the TM is a punctuation mark or a bullet character, or perhaps a term here and there. In the past, all these edits had to be done manually, but now, with the help of Studio 2017’s new fuzzy match repair feature, these segments are either fully or partially fixed on the fly by Studio, improving our productivity and cutting down our editing time. 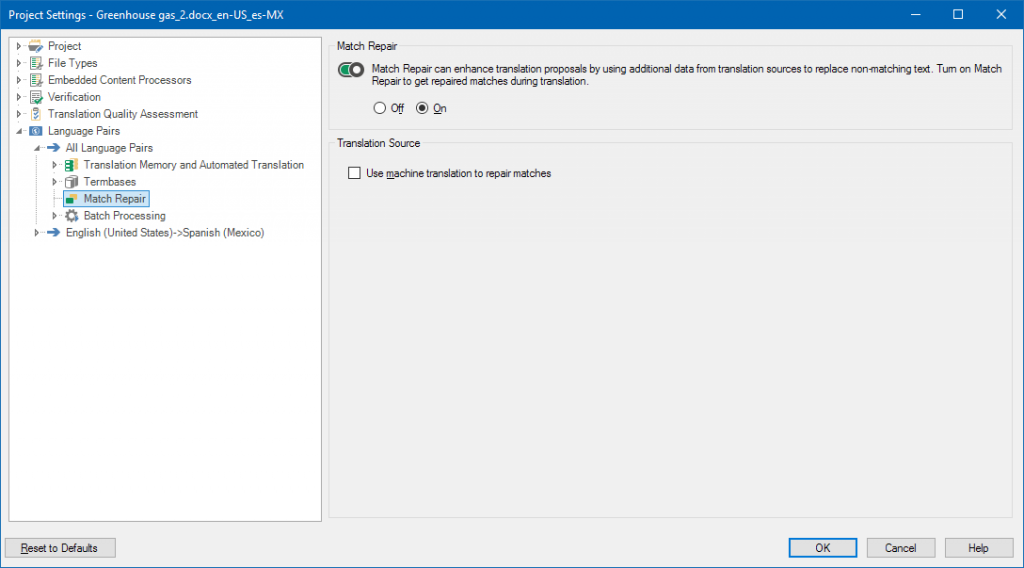 With Match Repair enabled, we’ll see a little wrench symbol in the segment status of the appropriate segments, indicating that repairs have been implemented.

In the example above, we see that the word Mars, which was in the original TU that is stored in the translation memory (TM), has been removed from the fuzzy match, along with the preceding comma and space, and the final period of the segment has been deleted as well. This is a perfect fuzzy match repair. The user would just need to confirm the segment, with no other editing needed.

Sometimes, the segment may need some touching up, as in the example below, where the article “la" in front of “Júpiter" needs to be removed. This is not a fuzzy match repair error, though. It’s just that Studio has no way of knowing that in Spanish we say “la Tierra", but “Júpiter" doesn’t take an article. Studio has simply replaced the term for Earth with the term for Jupiter, which, by the way, comes from the termbase, as you can see on the far right of the screenshot.

Even though fuzzy match repairs are made based on existing resources, such as the content of our TMs and termbases, the feature works even with very limited resources. For the examples above I used a TM that only has 22 translation units in it and a termbase with only 20 terms.

When AutoSuggest dictionaries first came out, I wished that this useful resource could be dynamically updated as content was added to the TM. With upLIFT, I got my wish… and a lot more.

Studio 2017’s upLIFT technology takes the information in a translation memory and analyzes it to identify useful segment fragments that can then be offered to the user during translation. This requires preparing existing translation memories with a process called Fragment Alignment. However, the process doesn’t run on very small TMs: at least 5000 units are recommended, although I can report that I have successfully built translation models for TMs with only a couple thousand TUs.

As we see below, for a small TM like the one I used for the fuzzy match repair examples above, while Fragment Alignment can be on, it’s not possible to build a translation model. There just isn’t enough content in the TM for Studio to do something with it. (You can access this screen via Project Settings – All Language Pairs – Translation Memory and Automated Translation, then select the appropriate TM and click on Settings). 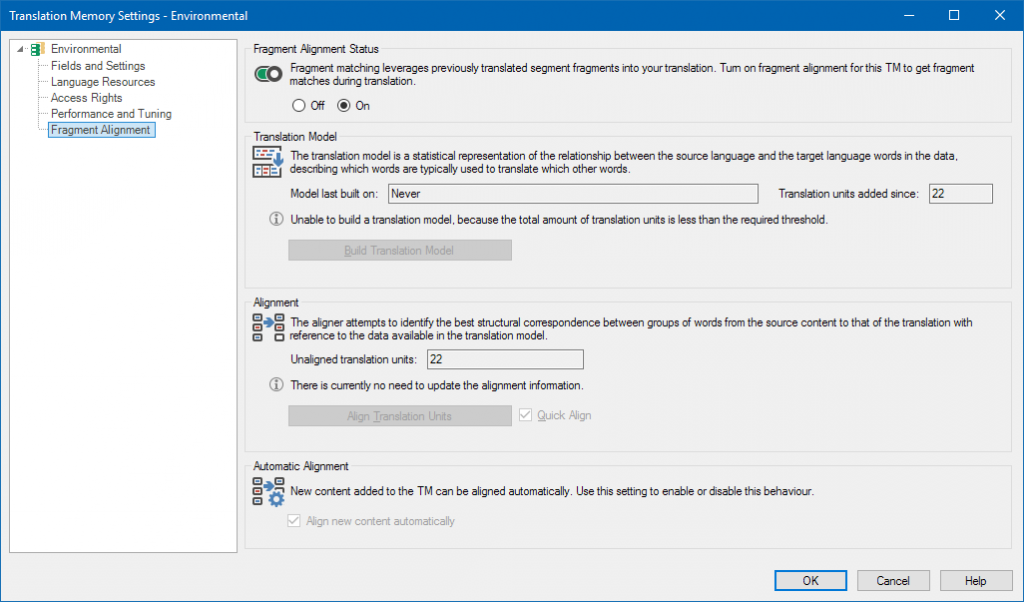 For the example below, I will use one of my main TMs, which has been previously prepared with Fragment Alignment, as shown below. 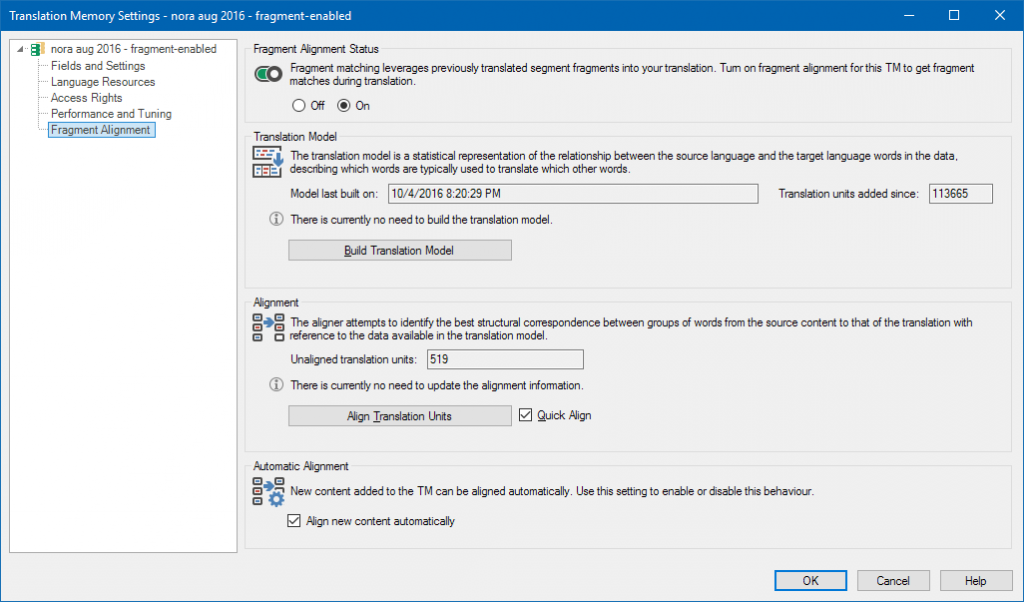 While Fragment Alignment is a feature of the translation memory, using the aligned fragments for segment matching is a project-specific feature that can be turned on and off or fine-tuned in the Project Settings, as we see here. 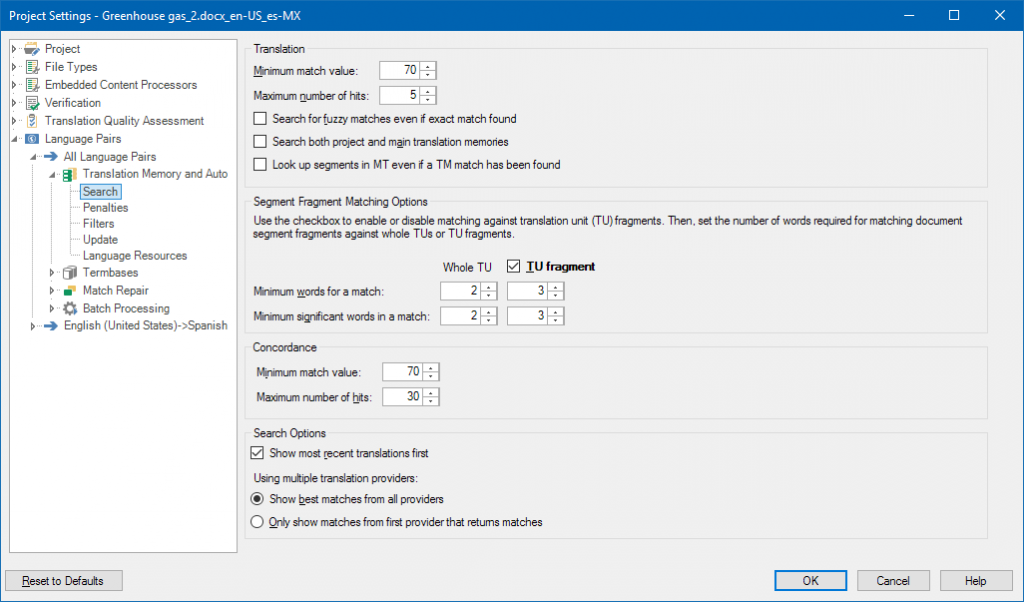 By default, the TU fragment box is unchecked. To get the best results, I recommend checking it. 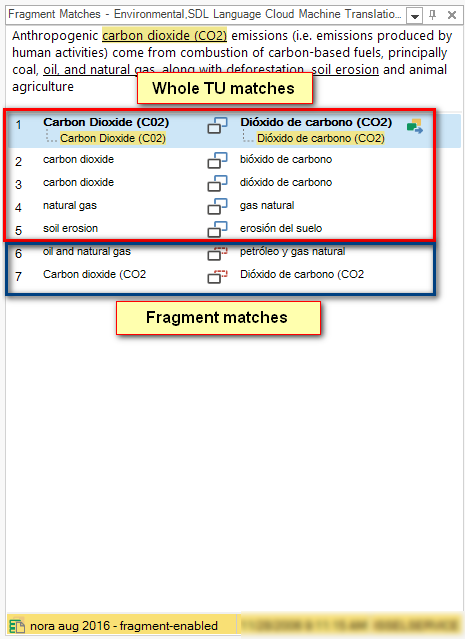 During translation, these matches, and their sub-fragments, are offered as AutoSuggest hits as soon as I type the first letter. Note that I have placed the Fragment Matches window to be always visible on the right side of my screen, I find this very helpful to have an immediate idea of the fragment matches that are available for a segment. 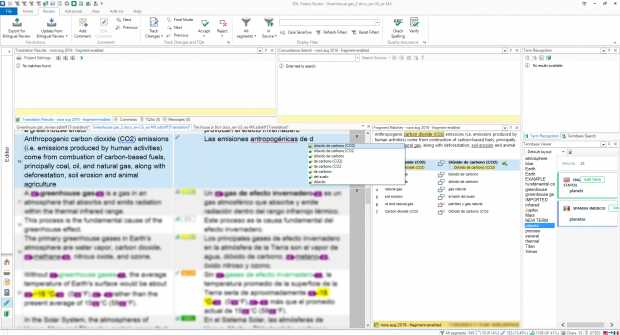 A final note: you can change the number of fragment matches you get by changing the numbers for the Whole TU and TU Fragment match settings.

The last feature I’d like to go over is Adaptive Machine Translation. In the past, when using an automated translation engine, after having spent time editing a segment, I would go to the next segment only to find that I had to correct the same things again and again. With Studio 2017’s AdaptiveMT feature, this is no longer the case. The automated translation engine, specifically the SDL LC, “learns" from my edits and applies them in subsequent segments.

To use the AdaptiveMT feature, you simply select SDL LC Machine Translation as the translation memory provider, go into Settings and set up your adaptive engine (or select an existing one if already set-up). 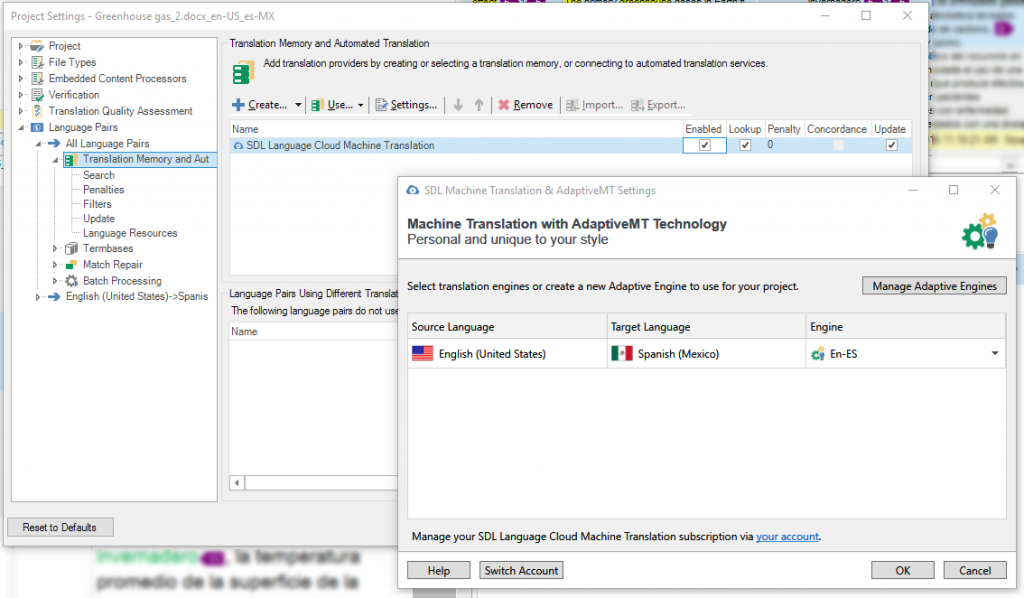 The SDL LC Machine Translation TM can be combined with other TMs, but in this example I will use it by itself.

Note that the Update checkbox should be checked so that any edits we make can be remembered.

When Adaptive MT is used, the segment status icon will show a lightbulb alongside the “AT" that indicates Automated Translation.

In the example below, the automated translation engine is offering “dióxido " for " dioxide", but I want to use the alternative spelling “bióxido" instead. So, this is what I initially get from the SDL LC Machine Translation engine:

After I edit and confirm both translation units, they now look like this:

I don’t have any other TMs active in this project, so the translations are not being stored locally, I’m just updating the AdaptiveMT engine.

If I now clear the segments and use the SDL LC AdaptiveMT engine again to populate the segments, the automated translations are now using the corrected spelling.

What this shows is that the AdaptiveMT engine has “learned" my preferred term and I won’t have to do so many edits in future segments. This is only a limited example, but you will find that the more you work with your AdaptiveMT engine, the more it will learn about your style and preferred terminology, and it will remember all this for future projects where it is used.

I hope you will find these Studio 2017 features useful as well, and that they will contribute not only to your being more productive, but also to making your work more enjoyable.

about Nora Diaz Nora Díaz is a full-time translator and translation team leader who works for clients located around the world, covering every aspect of the translation workflow. Her interest in technology has led to a constant exploration of productivity tools, including SDL Trados Studio, which she enjoys writing about to share what she has learned with other translators.