Notice: Our store will be offline for maintenance on Saturday 31/07/2021 from approximately 03:00 until Monday 02/08/2021 at 11:00 BST. During this time, you will be unable to purchase or login to your SDL account.
There is no content on local website I understand, close this message.
Welcome to the micro homepage!
The page is not available in your local language
Go back
Stay
I hope you enjoyed part one of our interview with Marc Joss, football translator and interpreter. With Euro 2016 underway we caught up with Marc for part two of our blog, where he discusses how he ended up working with Guillem Balague, what the life of a football translator and interpreter involves, maintaining a healthy work/life balance plus who he thinks will win Euro 2016.

In part one, we mentioned you have translated football biographies, how did you end up working with Guillem Balague?

As I mentioned earlier, I was very disappointed not to hear back about what I thought was the dream job that Guillem had posted about in late 2012, but I was working as an English language assistant in Paris at the time and it turned out to be a blessing in disguise. By June 2013, I had finished my teaching post in France and returned to London in search of a full-time job. On the way back from a weekend away, on arriving at passport control, my friend Dom said to me, “Marc, I’m pretty sure that’s Guillem Balagué!" Indeed it was and so we let a few people go past us in the queue before striking up a conversation with him.

While Dom was interested in Guillem’s opinion on Aston Villa’s latest recruit at the time, a full-back called Antonio Luna, I swiftly mentioned the job opportunity that I didn’t hear back about the previous year which finally put my mind at rest after months of wondering why it never went any further. Guillem also told me he was writing an authorised biography of Lionel Messi at the time and although he had a translator working on it, there was a chance he’d need a second one to help out. Three months later I could barely believe my ears when I received a phone call on a Thursday evening asking if I could translate 12,000 words by the Monday which was how it all kicked off! I’ll be sure never to complain about a long queue at passport control for the rest of my life!

You are an interpreter as well as a translator, do we know any clubs or players you have worked with?

I’m lucky enough to say I’m sure you do! I’ve done regular work at West Ham with their French and Spanish-speaking players since summer 2014 and have been especially privileged to interpret for Dimitri Payet on several occasions throughout the 2015-16 season. Other big names include Brazilian legend Zico (Portuguese – English), Arsenal’s Petr Cech (English – Spanish) and Real Madrid great Fernando Hierro (Spanish – English). 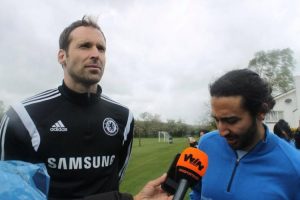 What sort of work does interpreting for a club or player involve?

The most standard scenario is consecutive interpreting where an English-speaking journalist or reporter is interviewing a player who would rather speak in his native language, or it may be a press conference. The questions are asked in English, unless I’ve been given them beforehand and can directly interview the player myself. If that isn’t the case, I translate the questions for the player (unless his understanding of English is good enough not to need me) and he will then respond in his own language. I make notes and once he has finished speaking, I relay the answer in English.

In terms of what happens with my answers, my words may be used as a voiceover, subtitles or quotes may be picked out for an article, depending on the situation. Of course you need excellent football knowledge to be able to do a good job and I make sure I prepare by thinking about likely questions, reading up on the player/manager, brushing up on relevant vocabulary and watching footage of them on YouTube! It’s also a fabulous excuse to tell my partner I need to watch as much football as possible. “I’m sorry you can’t watch the Great British Bake Off because I definitely need to watch Getafe v Eibar live for work," didn’t go down too well earlier this season…

In your experience as a football translator, which footballing nation takes translation and interpretation the most seriously?

I’m afraid I’ve only ever worked as a translator and interpreter in the UK, but have noticed how many clubs in Spain and Italy have really stepped it up with the English versions of their websites and social media platforms in the last couple of years. Twitter has had a huge role to play in bringing players and clubs closer to fans all over the world and English is probably the single most important language for doing so which is great for me and other native English translators, in particular.

Your photos show that you have worked with some big footballing names, if there was one player or manager, past or present, who would you like to work with and why?

Friends have previously made the comparison between José Mourinho and me and I would definitely be interested to meet the Portuguese coach who started making a name for himself as Sir Bobby Robson’s interpreter at Barcelona in 1996. Although I’m not necessarily a fan of his playing style and below-the-belt tactics, he is a fascinating individual whose linguistic skills have played a huge role in him becoming one of the world’s most successful managers!

Is it important to maintain a healthy work/life balance as a translator?

It definitely is! The beauty of being a freelance translator is that you’re in charge of your schedule, but at the same time you have to work out what fits your lifestyle and ensure you don’t spend days on end locked away at home without stepping outside or socialising.

I keep my schedule quite busy by playing 5-a-side football twice a week, following Arsenal home and away and co-running a Nando’s fansite, which involves organising ‘Reviewer Dinners’ every two months or so. Of course I need to ensure I get enough jobs to be able to enjoy my other hobbies and if it means working through the night or on the weekend, so be it!

And finally… who are you tipping for Euro 2016 glory?

With Spain’s domination in the last two tournaments and the remarkable run Spanish sides have had in the last three seasons in Europe, I’m backing La Roja to retain their title and prove that the 2014 World Cup disaster was a mere blip.