There is no content on local website I understand, close this message.
Welcome to the micro homepage!
The page is not available in your local language
Go back
Stay
Translating for the tourism industry can be a lot of fun. Not only is it an opportunity to get creative while you write, but you get to research interesting, far-flung places that inevitably leads to making a mental note on ideas for your next holiday!

Lots of newer translators make the mistake of thinking that tourism is an “easy" specialism, because the texts are not usually highly technical, and the projects aren’t as long as, say, literary texts. Likewise, companies in the tourism industry often don’t consider setting a budget aside for professional translation, thinking that their text is quite straightforward and nothing that Google Translate can’t handle. Or, they’ll get it translated on the cheap, using a freelancing site such as Fiverr or Upwork.

But the truth is, tourism texts still have their challenges, and a poor quality translation can damage a company’s reputation. A 2013 survey found that 82% of Brits would think twice about using a company whose website had been badly translated into English, and machine translation tools such as Google Translate aren’t much help – even when you’re using their own service, Google classifies automatically translated websites as “automatically generated content" and pushes it further down their search rankings.

Although there are many different branches to tourism translations, including hotels, aviation, food and drink, culture and sports, they all have their idiosyncrasies that require a little extra research and creative solutions. Here are a few examples of why tourism isn’t as easy as it looks…

I almost always come across food, events or locations that are unique to the location I’m writing about. While attempting to translate them results in a nonsensical sentence and may cause more confusion, leaving them in the original language may not be enough, either. Where I live, for example, is famous for typically British food such as cream teas and Cornish pasties – but try putting them into another language! Depending on the purpose of the text, translators may need to add an extra explanation or a gloss – and tourism companies need to allow for this extra text in their materials.

Writing to appeal – while staying on-brand

Even when a business opts for a human translator in lieu of machine translation, many translators still sometimes translate the text too literally, making it clunky and less attractive than the original. Just look at this sign that I spotted in a hotel recently: 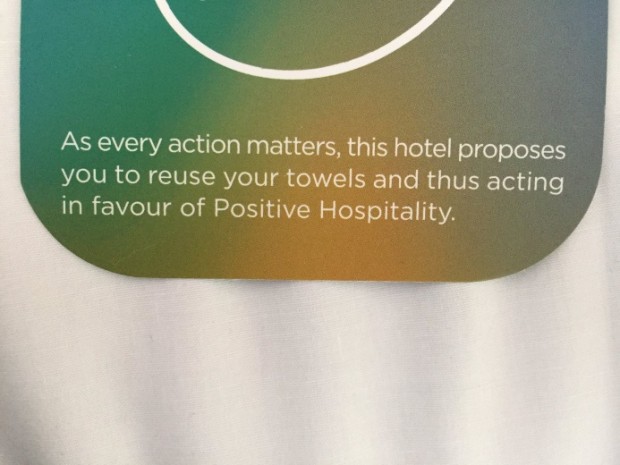 This hotel obviously has a clear brand strategy, voice and tone – in French. But this hasn’t translated very well, proving that it is also the company’s responsibility to share their vision with their translator, as well as the translator’s responsibility to ask the company about the tone that they are after. And don’t be afraid to stray from the text and be creative, if that’s what’s required. The purpose of most tourism texts is to persuade people to visit, so the language used should be vivid and unique.

Not being able to see what you’re describing

Sometimes it’s surprisingly hard to describe a place you haven’t been to, as you don’t want to give false information. I’ve often had situations where the text I’m translating isn’t very clear on where a landmark is in relation to a hiking trail, for example. In fact, just the other day a colleague of mine was having trouble translating a German tourism text: the text describes the history of the crypt in a cathedral, then starts talking about a meditation space. This gave her pause: did they hold meditation events in the crypt itself, or just in the cathedral as a whole? Surely the former would be a bit creepy!

Ambiguous texts like this require a bit of extra research in both languages, as you may have to read travel guides or reviews to find more information. But it’s always worth asking the client if they have photos to send along with the texts, to give you a better idea of what to say.

Finally, for all of the above points, sometimes it’s best to just ask the client for clarification than risk getting it wrong. Don’t be afraid to ask questions – collaboration should be encouraged. After all, the translator and the tourism company are both working towards the same goal of creating great tourism content!

To hear more from Natalie check out her blog, where she writes about language, translation and business. For more information about her services, head to her website, or say hello on Twitter or LinkedIn.

about Natalie Soper Natalie Soper is a French and Spanish to English translator based in Plymouth, UK. She helps businesses reach more international customers and extend their reach overseas, especially in the fields of commerce, tourism, arts and culture.