There is no content on local website I understand, close this message.
Welcome to the micro homepage!
The page is not available in your local language
Go back
Stay
With football fever set to sweep the European continent over the next month with the start of Euro 2016, we caught up with Marc Joss, a football translator and interpreter, to discuss why he chose football as a specialism, his experiences as a translator and setting translation rates plus much more.

What attracted you to the world of translation?

I’ve always been fascinated by different languages, particularly the way in which equivalent idioms are expressed, reflecting cultures and traditions. Being able to work in the world of translation means I’m lucky enough that one of my main hobbies is a huge part of my working life, which is a notion I think most people would be attracted to.

You have chosen football as your translation specialism. Was it always the plan to be a football translator and what led you to this decision?

My father instilled in me a love of football from a very early age and I knew from my first inspirational Spanish lesson at 11 years old that languages would play an important role in my life.

I can’t say that I’ve always planned to be a football translator, but my love for European football, particularly La Liga, meant I received an influx of messages from friends back in 2012 when Spanish football expert and journalist Guillem Balagué posted on his website that he was looking for a native English speaker who spoke Spanish and loved football to work for him full-time. After reading that job description, I realised there was definitely scope to combine my languages and the beautiful game as a profession and, although my initial job application was unsuccessful (more on that later), it was the indirect beginning of what I would call the dream job.

Do you think it is important to have a specialism as a translator?

The world of translation is so broad and there are so many complex subjects that I think specialising makes sense for a range of reasons. I can translate a football-related text much faster, more accurately and know I’ll enjoy it more than would be the case for a legal or medical document so I try to stick to what I know best, provided there’s enough work coming through, of course.

Is networking a vital part of finding work as a football translator?

Networking can certainly help! You never know when someone you’ve met might think of you and get in touch for a possible job. Networking with fellow translators and interpreters is also very useful for sharing experiences and contacts. For example, if there’s a job I can’t do, I have a list of excellent translators I’d happily pass work on to, and they do the same for me. In fact, when I was interviewed by the sports section of Redbrick, the student newspaper at the University of Birmingham, in early 2015, a translator who read it put me in touch with the languages man at Arsenal which was a fantastic opening for me. You just never know!

I also run a free language exchange event called Babble every Sunday evening in central London which can be a great place to network and it means I get to practise my languages with natives on a regular basis.

What approach, if any, do you take for marketing your services to find new work?

Putting yourself out there is crucial. I have a website which I update regularly and although it’s far from the world’s best, it does come up on Google and (I believe) portrays me as a professional in a positive light. Twitter, LinkedIn and Facebook all have their uses too.

I check LinkedIn regularly and have occasionally been recommended for jobs on there, so I’d say it’s important to keep it updated, although I’m sure there’s a lot more to it that I haven’t fully explored yet..

I’m also a member of a few Facebook groups for translators, for example ‘Things Translators Never Say‘ which I find quite enjoyable for discussing life as a translator with fellow professionals, especially as we don’t have that usual social workplace environment.

What experiences have given you the most joy as a translator so far?

Well it doesn’t get much better than seeing your name in print for the first time which was for Guillem Balagué’s Messi book back in 2013. I have to say, however, the fact that the first chapter that I translated was about Barcelona beating Arsenal in the 2006 Champions League final definitely didn’t give me any joy as a Gunner! 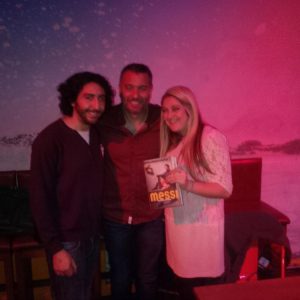 I’ve also been lucky enough to work with some of my favourite Arsenal players, past and present, from Santi Cazorla to Thierry Henry. Interpreting for a footballer who plays for my own football team is probably when the dream job vibe comes through the most! 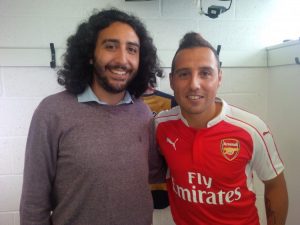 The third and final example I’d cite would have to be the work I’ve done with Dimitri Payet at West Ham. When he signed for the club in summer 2015, I don’t think many people expected him to do as well as he has done, but he settled in straight away and I have done about ten interpreting jobs with him throughout his inaugural campaign, including the West Ham end of season awards which was a rather special evening in which I ended up doing French-English interpreting on stage in front of 1,100 people that was also broadcast live online! 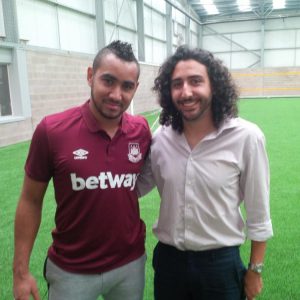 Has there been anything you encountered as a translator that has proved challenging which you were not expecting?

I’d say the biggest area of football translation that has proved challenging since the beginning has been the contrasting ways in which the English and Spanish-speaking worlds approach injury information.

The Spanish press and clubs tend to enjoy specific descriptions mentioning muscles and medical terminology that would normally be reserved for our doctors and surgeons. I remember feeling rather inept when I discovered that many of the Spanish terms I was looking up on the Messi book project had very similar English equivalents, but the issue was I hadn’t previously heard of them in my native tongue. The decision in the end was to adapt the level of detail for the target readership which made my job somewhat easier!

Another area that I find quite tricky and interesting is translating questions from English because the language is so well geared towards the “How _____ (insert adjective here) are you about bla bla?" formula, that does not have obvious equivalents in the romance languages, or at least if it does, I’m not all that familiar with them! I feel that although part of the nuance in the question may be lost in the foreign language, it rarely affects the answer so I consider it more of a structural difference than anything else.

A big part of my work is translating interviews that have been conducted in French, Italian, Portuguese or Spanish into English which brings a whole host of obstacles with it. You never know how strong the speaker’s accent might be or how often they will make cultural references that require research and adapting in English. The beauty of this is you really do learn something new every day!

You have translated football biographies and transcribed documentaries. How do you approach negotiating your rates? Any techniques you have learnt over the years?

There are many aspects to consider when you negotiate your rates. You don’t want to put the client off by going in too high and you don’t want to undervalue yourself and not receive a suitable fee for your time and expertise. Every job is different and should be treated as such. If you think a particular translation piece might be very enjoyable and not too time-consuming, while also potentially opening the door for future work, maybe that would be a good time to consider dropping your rate slightly. If you are in the enviable position of being overloaded and are offered something less attractive, that could be a good time to increase your rate slightly.

I also think it’s important to know that you can say no to jobs and it isn’t the end of the world. If the money isn’t good enough or a short deadline would mean you wouldn’t be able to deliver the translation to the best of your ability or it would ruin your work-life balance, maybe saying no is the way forward.

I’m always interested to hear how other translators and freelancers in general approach this area so feel free to get in touch!

What advice would you give any translator or interpreter looking to break into the world of football or sport?

A social media presence is very useful as there have been many occasions when I’ve seen, posted or shared tweets about jobs in the industry. You simply never know how it might all begin. Often being in the right place at the right time is crucial and it goes without saying that the more common football languages you speak, the better!

Looking ahead, any language of a country hosting a major tournament (World Cup or Euros, particularly) is likely to be in high demand, so any Russian speakers should be ready for a busy 2018!

The Euro’s are just about to kick-off, does a big tournament like this offer Freelancers the opportunity for more work?

Indeed it does. Of course the nature of international tournaments means there are plenty of languages involved on a high-profile stage with huge global interest global.

One of the companies I freelance for, Clark Football Languages, will be working closely with UEFA throughout the tournament and providing translations of press conferences and interviews with players, coaches and fans representing every participating country.

When it’s tournament season, they take on freelancers to cover the languages involved and need to have a flexible team given the unpredictable nature of timing and the amount of content involved. It may not be too late to check out the website if you’re interested. Good luck and we might even get to work together someday!

Read part 2 of our blog with Marc, where he discusses which nation takes football translation/interpreting more seriously, maintaining a healthy work/life balance and who he is tipping for Euro 2016 glory>> 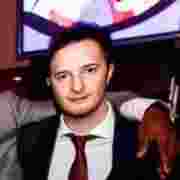